Many people know know me well know I love to take pictures. This is a relatively new finding-I started on a trip to England with some friends and haven’t stopped! Unfortunately the only equipment I have to work with is an iPod and the camera on my phone (or phones I no longer use). Still, I think they turned out pretty damned good. Others, not so much, which is why I might not have published or shown some of the earlier ones. Most of these were taken with my old LG for Verizon, but not all.  Anyway, here are the “weird” photos I’d like to submit to Cee’s Oddball Photo Challenge. http://ceenphotography.com/cees-odd-ball-photo-challenge/ 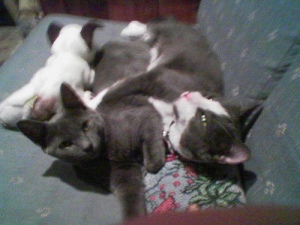 Haley and Slater (from left)
Two of the sweetest cats in the world! They can often be found in various affectionate poses. Slater also likes to run around the house like a madman, chasing after nothing. Maybe he sees something I don’t

Hey, I told Daniel Tiger I’d scan him in if he didn’t move…:)

I miss my Daniel Tiger. 😦 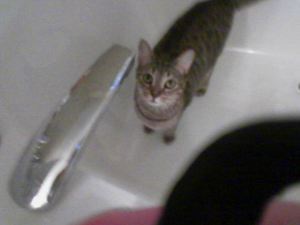 Toby is a Manx…this breed of cat is born without a tail. He’s what’s called a ‘rumpy riser’, because he has a little ‘nub’ he moves up and down.  Strangely, though, he is the only one I’ve ever seen chase his ‘tail’….*shakes head*.  Freak!

He’s a total chunk, weighing what feels like 12-15 pounds. Believe it or not, he’s not the fattest cat we know. I know one who weighs 26 pounds. Yes, you read that right. 26. What’s interesting is that he feels pretty solid, although I’m sure there’s some fat under there.

Here are some other photos I just feel like posting:

Anyway, these are some of my “oddball photos”. I hope you enjoyed them!

30s, female, married, Georgia US, very opinionated, open-minded mostly, too nice for my own good, Christian, fairly liberal, friendly. I have a pretty big family and several friends and in-laws that might as well be family. I don't have kids, but I have five cats who think they're kids. I have a silly (and sometimes off-color) sense of humor. I'm a Christian so I'll try not to be nasty or use bad language in my posts, but I'm not making any promises, END_OF_DOCUMENT_TOKEN_TO_BE_REPLACED
This entry was posted on Saturday, August 8th, 2015 at 3:25 pm and tagged with cats, Cee's Oddball Photo Challenge, cute, Photos and posted in cats, Photos. You can follow any responses to this entry through the RSS 2.0 feed.
« My Brain On OCD
My Thoughts On Life and a Plug For a Friend »

Pouring My Art Out

Ripping out my guts for your entertainment

Fix yourself a cup of tea. Let's talk theology.

tales of a wayward mama

Child of the human condition

Notes from the U.K.

Exploring the spidery corners of a culture and the weird stuff that tourist brochures ignore.

My Ears Are Tired

where the days are long, but the years are short

Express Yourself ..We Care

Ne'er-do-well on the loose

utorials about WordPress, blogging, social media, and having your say on the web.

'all our lives are a poetry - awake our souls.' ~ Battling the hypocrite within ~

Teaching the art of composition for photography.

The life of PASSION

Not A Minute To Waste

About life. Anything and everything about it. Let's talk.